Another Issue, another Artist. For this issue, we contacted Tommy's, who might be less known around the Guild Wars community outside the frequent Nolani Academy visitors on http://www.guildwarsguru.com, but not less an artist. He is a great example of how Guild Wars inspires people to start and create art, and as such the progress one can make if you just start and keep practicing...

GuildMag: Can you tell us a little about your IRL self?
Tommy's: Sure I can, I'm 19 years old, and I'm in my second year of Law in Amsterdam (the Netherlands) at the moment. Besides drawing you will often find me in the gym or on the hockey field (for all you Americans, that is field hockey). And as a regular guy I of course go dancing on the weekends, have vacations with my friends and the usual stuff. I am quite an average guy. 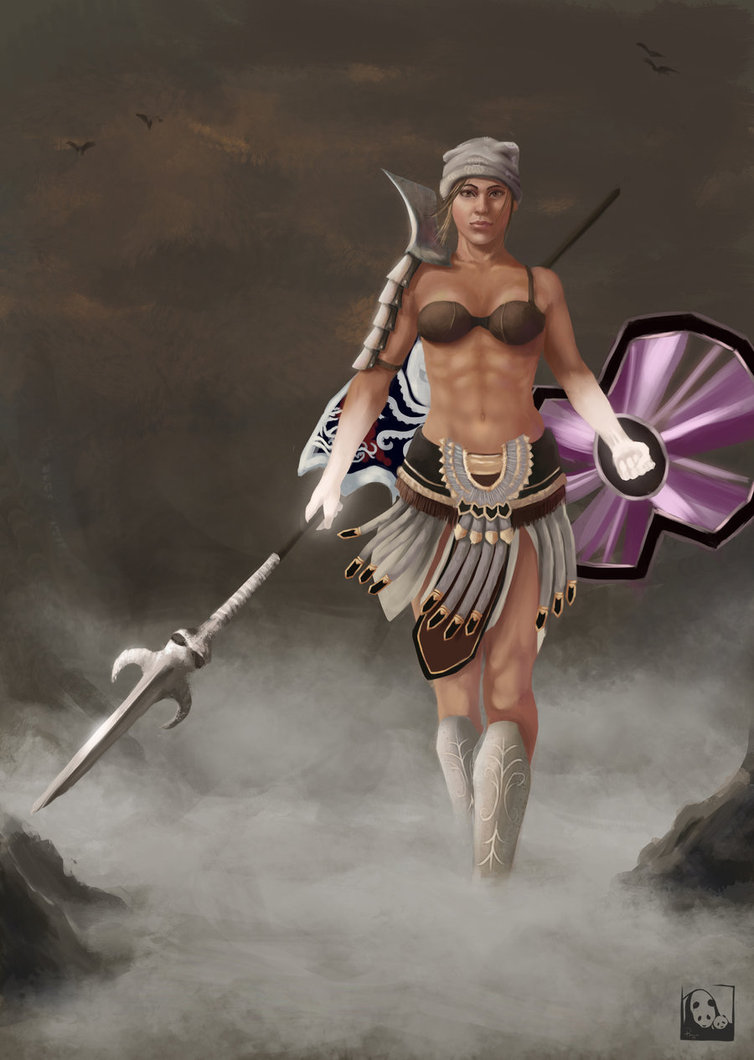 GuildMag: When did you join GuildWars?
Tommy's: I'm not really sure to be honest. Together with a few friends of mine I played Warcraft III for a long time. Then we wanted something different and when they saw an advertisement on one of the gaming programs, we decided it should be Guild Wars. One of my friends bought it right away and when we asked how it was: well this is my character (one unbelievably ugly Necro) and I can sit here and dance go out and fight and that’s about it; we were like 'meh'. He never left pre and we never played the game together. After a while I got really bored of Warcraft III and remembered that my friend had this game called Guild Wars. He gave it to me, and I did like it! I remember that after spending months in pre and post searing Ascalon killing stone elementals forever, someone showed me that the game was actually bigger. And then my adventure began :p I think at that moment Factions was just released, so I think thats 4-5 years now?

GuildMag: Do you have a favourite profession?
Tommy's: Yes I do. I'm one of those few that loves to heal. I have played very little apart from my Monk, only my Ranger and Ritualist got some attention too. But favourite profession would be Monk by far. Oh boy I cried when I heard they wouldn't make it into Guild Wars 2.

GuildMag: When did you start making Guild Wars related Art? (was there a special occasion that sparked it?)
Tommy's: I was at work and it was extremely boring, so I went browsing GuildWarsGuru. I came to a place I had never been before: Nolani Academy. I came across Lili Frogs comics and some great artists and asked myself why the hell I had never been there. I kept watching the threads, until i came across one that was about drawing something yourself. That was about October 2009. My first drawing was for Tzu I believe. Then I did a few doodles, mostly elf kind of things for Hoodie, who was the best help around then. But it was for the Wintersday Workshop 2009 that I really started to like drawing and did it more often. I think that workshop was a real turn for me, and I'm really glad people take effort in hosting these workshops. They are really great for starters as well as for the more progressed artists. So I've been drawing for slightly over a year now.

GuildMag: Did you do art before starting making Guild Wars related art?
Tommy's: No, I sadly enough haven't. I started with Guild Wars as my subject, and after a year it's still what covers most of my drawings. Though as much as I love the people in Nolani and I like Guild Wars, I do plan on doing more non-Guild Wars (or any game for that matter) related art.

GuildMag: What is your favourite art form? do you have a favourite medium for your art?
Tommy's: My favourite art form would be digital painting. I love the rough paintings a lot more then those line art drawings with way too smooth shading. I think Kekai has a great gallery that matches my taste! As for the medium, I do all my drawings on the computer with Photoshop and a tablet (Wacom Intuos4 M, for those who are interested) but I'd really like to learn to paint with oil and acrylic. I guess this summer would be a good moment for that.

GuildMag: Have you ever won a prize with your Guild Wars art (be it official or workshop?
Tommy's: I have tried three times in the official art contests now (Halloween '10 and Wintersday '09 and '10). The first entry I didn't expect much from, hell I was only drawing so shortly, but last contest I hoped for a mention. Sadly enough, Arena Net disagreed. As far as the workshops go, last Wintersday Workshop I won the Best Progress award, which I'm really happy with. In previous years I've also won prizes in the workshops, but those were rewarded for my kind behaviour.

GuildMag: Will we be seeing you (and your art) in Guild Wars 2 ? (if yes, any idea on what sort of character you will play?)
Tommy's: Most likely yes, if time lets me. I don't want it to get in the way of my drawing time too much, but I'd love to see how the graphics are in Guild Wars 2. I haven't decided what I want to play yet. At first I was thinking of a human, but I must say I find the norn more and more compelling. I really like the lore and the scenery of the sylvari as well, but I'll have to see what they look like in game first. As far as the professions go, something that can dual wield swords and a gun. But I doubt Arena Net is going to let me. Also a ranger for sure. We'll have to see what looks good around release.

GuildMag: If any of our readers would like to check out your art, where should they go?
Tommy's: I have my personal page with some of my art at http://overtoom.deviantart.com/. If you'd like to see progress as well as unfinished paintings, doodles, scraps and the like, you should visit my thread on GuildWarsGuru.


GuildMag: Anything you would like to share with our readers/your fans?
Tommy's: Yes I would. First of all, I'd like to give a big thank you to all the people over at Nolani for getting me to really like drawing and giving me a hobby I fell in love with. There are way too many to name them all here, but I'm sure they know who I mean.
Secondly, I'd like to say to all the people who are thinking about getting into drawing or the like: don't hesitate, and come join us over at Nolani. And as Guild Wars is almost coming to an end, we also have an art section ready over at GuildWars2Guru! We would love to help you out and help you improve.


GuildMag: Thank you Tommy's for your time.
Tommy's: No problem, I hope these are the answers you've been hoping for...

GuildMag: They sure were, a nice read and a little more insight in the artist behind the Art.