And it was, that a stranger came to the village of Wren seeking shelter and employment. Though young in years, her body was stooped and twisted, her flesh eaten by disease.
"Ye have the mark of plague upon ye," said the citizen named Gallrick. "Leave this place lest you sicken our people."
"I've lost my family and my home," cried the desperate woman. "Have you no heart?"
Yet each person, in turn, did look away.
Then from the crowd came a young woman, Sara. She looked upon the woman with pity. "If you need help," said Sara, "I will give it." And Sara did approach the gnarled, bent woman and did offer her a helping hand.
Then the sickened woman pulled from her body the robes of plague, revealing Herself to be the goddess Lyssa.
The people of Wren fell to their knees, begging Lyssa's mercy. But lifting Sara gently, saith She, "True beauty is measured not by appearance but by actions and deeds. Many have eyes, but few have seen. Of all here, you saw the beauty behind the illusion. And you alone shall be blessed with My gifts."
-- Scriptures of Lyssa: 45 BE

While each of the gods keeps their secrets from the view of mortals, it is Lyssa who may be the most mysterious. Alone among the gods, she presents herself not as a single goddess, but as twins ruling over the concepts of beauty and illusion. So far, the individual names of the twins have never been revealed to mortals, or even knowledge of whether Lyssa is truly two separate goddesses presenting a united front under a single name, a single goddess somehow split into two, or even if Lyssa’s duality is simply the mask she chooses to show to her followers. 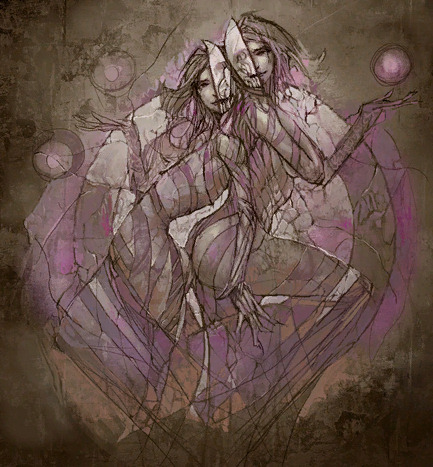 Thanks to her masks, both physical and magical, it is perhaps unsurprising that it is Lyssa who, among the gods, has the most variance in how she is interpreted across the known human-inhabited lands. Her matronage of illusion and beauty is a constant – in fact, statues of her true likenesses are said to be of such beauty that susceptible young men can be trapped, entranced by the sight until thirst overtakes them. Throughout the known continents, this extends to a matronage of the arts that produce works of beauty or rely on the glamours of the theatre to entertain. While rarely referred to directly except among adventurers, the powers she can grant to those she favours indicates that she also carries some responsibility over the raw energy of magic itself before it is converted into the stuff of life, death, or the elements, and thus passing into the domain of her peers.

In Cantha, however, greater attention is made of the duality of the twin goddesses and the paradox it represents than in other continents; concepts that recur elsewhere in Canthan culture (such as in the history of the celestials that must be faced in the test to become Weh No Su). This duality extends to her being viewed by Canthans as the mistress of fortune and misfortune both. Through her dominion over luck and over artistry such as that displayed in the feast of the celestials, one might assume that Lyssa would take a special interest in the Canthan New Year celebrations, but if so it seems she is content not to steal the spotlight from the celestial visitations.

Elonians, by contrast, speak of truths about Lyssa’s teachings that, in other continents, are mostly acknowledged only by those of her own favoured magical profession... and those that have first-hand experience of their arts. Namely, that she has rulership not only over beauty and illusion, but also directly over the emotions that they can inspire. This has naturally lead to her being viewed as the presiding goddess over courtship and marriage, and thus over the beauty, emotion, and, all too often, illusions of love. She is, however, feared as well as loved, as her changing nature and love of trickery leads some to see her as a bringer of chaos, a force that can destroy as easily as create. 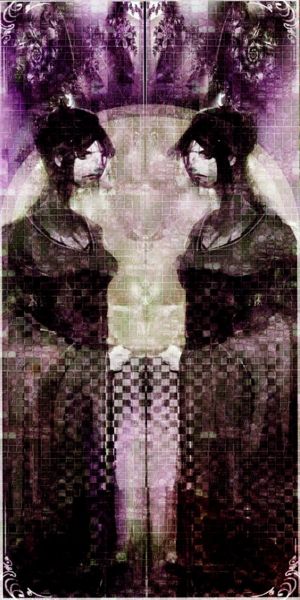 While Lyssa’s footprint has generally been a light one on the known history of the world, she did prove to be the most active of the gods during Abaddon’s rise and fall, subtly but overtly stepping in as the Sunspears made their way into Vabbi to show her followers the threat posed by Varesh and the Margonites and ensure their support of the Sunspears. When the Sunspears reached the ruined Temple of the Six Gods in the final stages of the crusade against Abaddon, it was Lyssa that blessed the heroes that would go on to destroy him. Why it was Lyssa that spoke instead of Dwayna, as the usually accepted leader of the five gods, is unknown – perhaps it was because the other gods felt that it was more meaningful for the message to come from Lyssa as the matron goddess of one of the nations most damaged by Nightfall’s approach, or maybe they simply felt that Lyssa’s talents made her the best placed to raise the spirits of those about to face the fury of a bound god.

The adventurers and soldiers most intimately associated with Lyssa are, of course, mesmers. Drawing upon her teachings, these illusionists and enchantresses sew confusion and disruption among their enemies through illusion, emotional manipulation, and turning their magic against them, whether by interfering with their spells as they are cast or simply by draining energy from their victims for their own use.

In Cantha, assassins also frequently pay homage to Lyssa, although less for her beauty than for the trickery and deception that can allow them to get close to her marks. They also claim to be attracted to her duality, although the assassin’s guilds are tight-lipped as to what exactly may be meant by this. While possibly simply the tendency of assassins to wield a weapon in each hand, it may also be a reflection of the aliases and dual lives that many assassins employ in their occupation.

Among the professions that pay homage to all of the gods, Lyssa is most commonly invoked for her power over the raw stuff of magic. Elementalists may invoke her to improve their ability to contain and manipulate the energy contained within themselves, although most elementalists likely hold the deity or deities responsible for their element(s) of choice higher in their regard. For dervishes, as well, Lyssa’s favour aids them in maintaining and replenishing their own reserves of magical power, and her avatar grants them the ability to contain significantly more energy within themselves, as well as to punish foes that attempt to wield magical powers or advanced combat manoeuvres in their vicinity.

Outside of adventurers, worshippers of Lyssa tend, unsurprisingly, to primarily be found among those who appreciate the arts, whether as patrons or as creators. It is unlikely to be coincidence that the leaders of many performing troupes and theatres practice the mesmeric arts, employing illusion and more benign mood-influencing magic to enhance their performances – one only hopes that the use of such arts to hypnotise audiences out of their money is kept to a minimum! Interestingly, however, this connection seems at its weakest among the Kurzicks – while each of the houses encourages talent in their chosen art forms, only House Brauer dedicates its paintings and sculptures to Lyssa.

The nation of Vabbi, believed by its inhabitants to be shaped and blessed by Lyssa herself, is another question entirely. While reverence is still shown to the other gods, the Vabbians regard Lyssa as their special patron, and a number of sites holy to Lyssa can be found within Vabbi’s borders. The Seborhin trees that lend the Garden of Seborhin their name are believed to be the trees favoured most by Lyssa, with a leaf caught as it falls on the wind seen as a sign of Lyssa’s favour. A more direct connection is seen in the Font of Lyss, used by Vabbian nobility and guests to refresh themselves before attending one of the celebrations or ceremonies of that land.

The heart of the Lyssan faith, however, was the Sebelkeh Basilica, which floats by magic over the waters of the Mirror of Lyss. Reached through teleporters on either side of a golden statue of Lyssa in a secondary shrine on the shore of the sacred lake, the Basilica was one of the holy sites desecrated by Varesh in her campaign to break Abaddon free of his prison. In fact, it was the blood rites that brought the demon known as the Blaspheme into the Basilica to transform it into an open gateway into Torment that lead Varesh’s last human general and his remaining loyal soldiers to finally realise the insanity of her plans and defect, lending what aid they could to the Sunspears. With Abaddon’s defeat, the restoration and reconsecration of the defiled temple has become a high priority in the eyes of Vabbi’s priests and princes.

Perhaps the most mystical site of Lyssa, however, is found not in Vabbi but in a mysterious frozen cave in the area known as the Mineral Springs on the eastern edge of the southern Shiverpeaks. Now inhabited mostly by ice imps, the only recognisable structure is a statue of Lyssa situated beneath a hole in the cavern’s roof that allows light to stream down, illuminating the statue as well as the snowflakes that drift around it. Stranger, however, are the devices that share this chamber with the statue, pulsing with energy of an unknown nature. The function of this energy is unknown, but if the attraction of the Eidolon known as the Ice Beast to the area is any indication, they likely represent a powerful source of magical energy to any that can harness it. This is the only known site where Icy Dragon Swords can be found, although how they came to be here - placed in storage or somehow created there - is unknown. 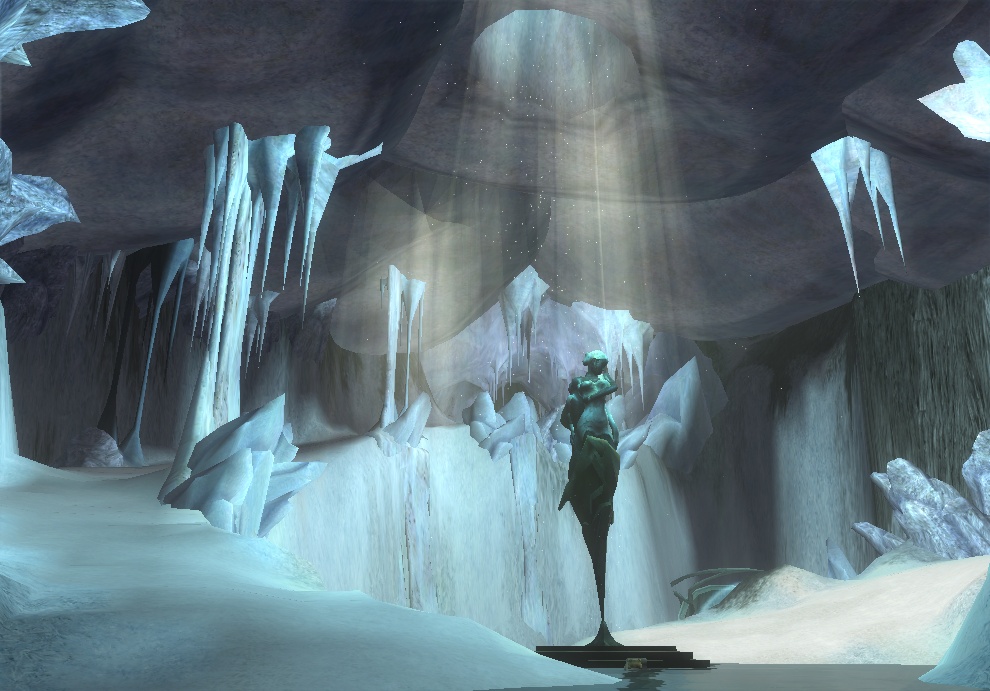 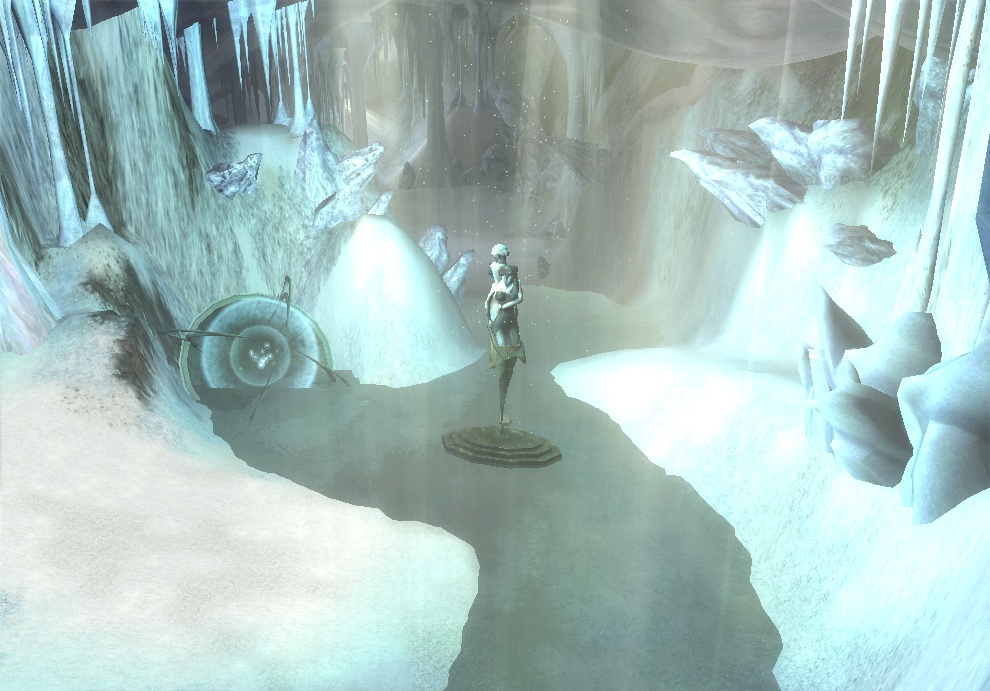 One thing that connects each of these holy sites is water – the Font and Mirror of Lyss and the ice crystals that form the walls of the cave as well as melting to pool on the floor. Even the seat of House Brauer is sited beside the river that flows through the Echovald Forest from Drazach Thicket towards the Jade Sea. The attraction of water to followers of Lyssa is perhaps obvious in the inherent beauty of water features and the mirages and tricks that water can play on the eye, even if it is not officially among Lyssa’s responsibilities.

This may, however, be one more thing that is set to change. As the pantheon adjusts to Abaddon’s fall and Kormir’s ascension, prophets and mystics are predicting that Lyssa may make a move towards claiming the domain of water for herself, adding it to the rest of her wide and multifaceted range of interests.